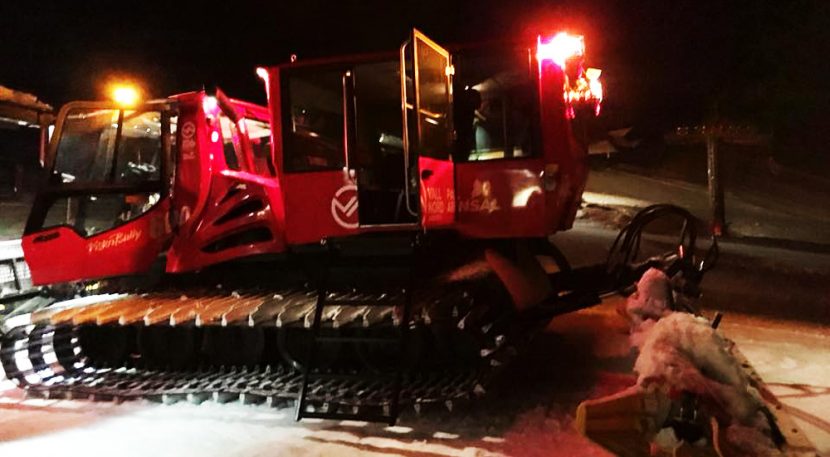 The mountain is beautiful during the day, but have you ever been on the mountain at night? It’s even better!  The other day we received an unexpected invitation: a dinner at the Xalet Igloo, on the slopes of Arinsal and of course, we didn’t want to miss it.
At 7:00 pm we arrived at the meeting point, the bottom of Josep Serra chairlift, next to the Hotel Crest, and there our transport was waiting for us: a piste basher!

Obviously at night the chairlifts are closed, and it is forbidden to ski in Arinsal, so there was no other way to get to the restaurant located in the high area of Arinsal than on a pistenbully (Snow groomer).  We went up quickly, very excited because not every day you ride on a snow groomer and it was such an experience! Even though the piste basher doesn’t have same speed as a car (because it is much heavier), the trip was so much fun! Have you ever imagined climbing the piste of Les Marrades instead of skiing it down? The steepness was such that we had to make an effort not to fall on top of each other. After 20 minutes of travelling we finally arrived at the Xalet Igloo restaurant where we have eaten thousands of times during the day, but never during the night.

Being able to observe the quiet slopes of Arinsal from its terrace under the stars is undoubtedly a magical sensation, however, at night the temperature is obviously colder than during the day so after a few minutes looking at the stars we decided to go inside the restaurant and get warm.

Xalet Igloo is one of our favourite restaurants in Arinsal, not only for the food, but also for the cozy and modern design of its interior that has been refurbished and covered with wood, cool paintings and neon lights! And to welcome us, what better than a glass of cava and a few appetizers to kill hunger while we wait for all the guests.

Once seated at the table, our favourite part: eating!

The varied starters looked amazing, including a vegetable soup with crispy bacon on top, a traditional Catalan trinxat and a foie canapé – all made with local products. If you have never been to Catalonia or Andorra, you may not know what Pan Tumaca is. This popular starter consists of toasted bread, which you rub on garlic so that it takes flavour and then you add tomato and oil.  A must in any Catalan dinner, which is delicious.  To give a bit more flavour to the toast, there was no shortage of local cold meats, such as Jamón serrano and Salchichón. All this, accompanied with a salad with nuts, honey and mustard sauce to lighten up a bit.

After this beginning, we couldn’t believe that there was still a main course to come: The cheese fondue! If you are a cheese lover, I am sure you will love fondue as well. While it is delicious, it is also fun to prick bits of bread and soak them in that big bowl of hot cheese but be careful not to lose it! This dish has its origin in the Swiss Alps, and the trick to keep the cheese melted throughout the dinner is the flame under the bowl that heats it constantly.

Between each plate we look out the window, where the mountain is in total darkness and every now and then a piste basher passes by grooming the slopes because in ski resorts there is also a lot of work to do at night – so that the next day skiers can enjoy perfect conditions.

When we could not eat any more, the waiter let us know that the fondues were not over yet, but this time, it’s chocolate! Despite being super full, we can’t say no! We soaked strawberries, pineapples, jelly beans and marshmallows in the big bowl of hot chocolate, because everything goes with chocolate!

After the banquet in which everything was delicious, we realized that we were still in the middle of the mountains, and we still had another exciting downhill trip in pistenbully. After resting for a while, to let the excellent food go down, between conversations we wrapped ourselves up and prepared to face the -10 degrees outside. We got back to the piste basher with a full stomach this time and instead of going down Les Fonts where we came from, the driver took a new route and took us down the blue piste Port Vell. It is such a strange feeling, going through the tracks where hundreds of skiers take every day, but in the dead of night with no one else around.

When we arrived back to our starting point at the bottom of Les Marrades, we said goodbye to all the guests and thanked the workers for this unforgettable and unique dinner in Arinsal. They say that if you eat cheese at night you have nightmares, but after such an extraordinary night it was impossible not to sleep like a baby.