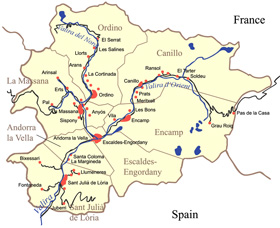 Nestled on the border between France and Spain, Andorra is a tiny country made up of rugged mountains, steep valleys and beautiful lakes. Andorra is in fact Europe’s sixth smallest country covering an area of just 468 square kilometres, with a population of just over 78,015 (2020, Department of Statistics). It may be small, but it packs a huge number of attractions into its mountainous landscape, with 65 summits over 2000m high and in excess of 300km of snowy slopes to offer, it is a firm favourite with ski and snowboard enthusiasts.

Officially named the Principality of Andorra (in Catalan, Principat d’Andorra), as it is ruled by two Co-Princes – the President of France and the Bishop of Urgell in Spain, however despite its unique status Andorra is still a country in its own right. Andorra is separated into seven local parishes: Escaldes-Engordany, Encamp, Canillo, Ordino, La Massana, Sant Julià de Lòria and Andorra la Vella which is the highest capital in Europe.

The three main resort towns attracting tourists for ski and snowboard holidays to Andorra are Soldeu and Pas de la Casa which can be found in the Grandvalira ski domain, and Arinsal which is located within the Vallnord ski area.

Andorra has one of the highest life expectancies in the world at 83 years! The fresh mountain air and excellent healthcare system will no doubt be key contributors to this statistic.

Andorra’s official language is Catalan, although French and Spanish are spoken widely, plus English is often understood, particularly within the holiday resort areas. Andorra also has many Portuguese settlers therefore Portuguese can also be heard spoken in this truly multi-cultural country. Interestingly, Andorra is the only country where Catalan is the official language, and they are proud of their traditions and heritage.

The currencies of Spain and France have always been accepted as Andorra doesn’t have its own currency, and until the Euro was introduced, both the Spanish Peseta and French Franc were used. Until recently Andorra wasn’t officially in the Eurozone but had used the Euro as its currency, however after lengthy negotiations, in 2014 it officially became a member of the monetary union and issued Andorran Euro coins. 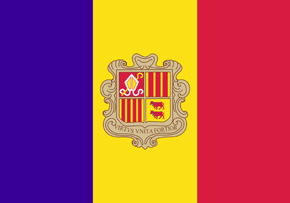 You don’t need to have a visa if you’re coming to Andorra from Ireland or the UK, however you need to have your passport with you and it is recommended that the passport is valid for at least six months after you return home. Those intending to work in Andorra will find that the situation is quite different from many other western European countries, Andorra is not an EU member state, therefore foreign workers need to apply for a work permit (which is usually sponsored by the employer) and will also need a legalised police report from their home country.

Due to Andorra’s duty free status, and not being a member of the EU, the amount of certain goods that are allowed out is restricted. You will find customs police located on the borders from both France and Spain and all vehicles may be stopped and searched.

Keep up to date with the latest news, offers and upcoming events!