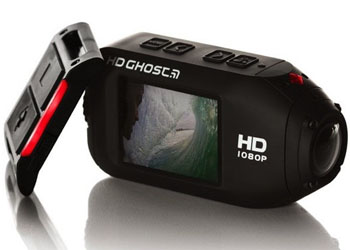 n Introduction into the World of HD Helmet Cameras

If you’re considering purchasing an action camera this winter, you’ll be pleased to know that there’s never been a better time to do so. 2012 has been an exciting year where action cameras are concerned and competition between top manufacturers is fiercer than ever before.

But first things first, what makes an action camera any better for a winter sports excursion than the humble handycam?

Action cameras, as the name suggests are designed for action. They are built to withstand the harsh elements, which come with skiing or snowboarding, such as snow & ice, sub-zero temperatures, high speeds and physical impact.

Having been designed specifically for action sports, action cameras are small and light, and can be mounted virtually anywhere on the user’s body or kit, be it goggles, chest, helmet or ski pole.

But what really sets action cameras apart from everyday video cameras is the technology that they pack inside. From super sharp lenses, variable video resolutions and multiple image capture modes, action cameras are highly versatile and capable of recording crystal clear footage in the most challenging of environments.

So what are the best cameras on the market at the moment?

Those planning on buying a camera this winter really are spoilt for choice, as just about every major manufacturer out there has rolled out a new model just in time for Christmas. Furthermore, 2012 has seen some major advancements in camera technology, with Wi-Fi connectivity undoubtedly taking centre stage as the ‘must have’ feature this winter. Wi-Fi has opened up a whole new world of awesome features, including smartphone syncing, live streaming and social sharing.

There are many options out there for the budding action camera owner, and while factors such as budget and availability will inevitably help sway decisions, there are certain cameras that should not be overlooked. Here are two examples:

GoPro Hero3 (from £199.99) – GoPro is undoubtedly the brand most synonymous with action sports culture, and having been around for almost 10 years now, has established a loyal following. The Hero3 is GoPro’s newest and best camera yet, and boasts several key improvements over its predecessor, the Hero2: it’s 30% smaller, 25% lighter, has a sharper lens and boasts twice the video performance.

The Hero3 is available in three Editions – White, Silver and Black – with the latter being the most technically advanced (and the most expensive at £359.99) of the three models. The White Edition (£199.99) is ideal for beginners on a budget, while the Silver Edition (£279.99) is the ultimate allrounder. All cameras come Wi-Fi ready and with a variety of mounts and accessories.

Drift HD Ghost (£299.99) – Drift is another brand synonymous with action sports, and the newest camera to come from Drift HQ, the HD Ghost is something quite special. Building on the best bits of older Drift models – a built-in colour screen, rotatable lens and wireless remote – the Ghost is in every way more powerful than its popular predecessors.

The Ghost’s best, or at least most unique features are undoubtedly its two-way remote, and video tagging feature. The two-way remote allows the user to see which mode the camera is in at all times, while video tagging captures a predefined period of time prior to and after an event, making hours of boring footage a thing of the past. The Drift HD Ghost also comes WiFi ready with a variety of mounts and accessories.

While the two cameras above are grabbing the most headlines this year, there are many other cameras out there well worth a look in. To name but a few: The Sony Action Cam – which marks the electrical giant’s first foray into the action sports world; the Contour Plus 2 – the only camera to offer full GPS tracking; the JVC ADIXXION – protected against the elements with its ‘Quad-Proof’ design; and the iON Air Pro Wi-Fi – the only camera to save data to ‘the cloud’.

With so many awesome cameras vying for your hard earned cash, how do you make a decision?

The process of buying an action camera should start with a healthy amount of research. Speak to other skiers or snowboarders about their experiences, watch some YouTube videos, ask the experts and read reviews to gain further insight into the inner workings of the camera.

Ultimately deciding which camera to buy will come down to budget, but with today’s mid-range cameras now packing more features than many top-end cameras of yesteryear, there’s few models out there that don’t present great value for money.

Action cameras are a great accessory for anyone with a passion for winter sports, so grab yourself a camera and start reliving your runs again and again!

This article was written by Action Cameras.  For more information about any of the cameras featured within this article, visit www.actioncameras.co.uk.