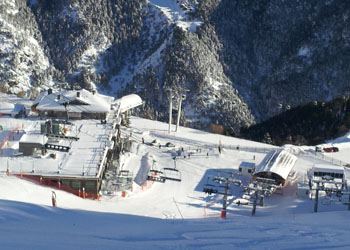 If you’re currently looking to decide where you want to go skiing this winter, then look no further!  Andorra has had the best start to a ski season for a number of years, with the base already up to almost a metre of snow, which has been topped up regularly since opening for business on December 1st.  Snow has fallen regularly for the past three weeks now and more is forecast to continue falling for the next few days, with everyone’s fingers crossed for a white Christmas!

For those of you new to the idea of a holiday to the tiny country of Andorra, perhaps having visited other more well known areas, then you might be in for a bit of a surprise.  Andorra boasts two fantastic ski areas, both with interconnected resorts covered on their lift respective lift passes.  If you have beginners in your group then it’s definitely worth investigating options in  and Arinsal as these both have lots of British ski instructors amongst their ranks which makes it much easier for people to learn when their instructor speaks their native language.  For avid snowboarders you should look at Pas de la Casa as the resort has a very young party vibe with many snowboarders returning year after year.

But if you’re a hardened skier who thinks you won’t be challenged, then think again!  This year the resort of Soldeu held both European and World Cup downhill racing on the women’s circuit for the first time, which is being followed in 2013 by European Cup racing on the men’s circuit.  The famed Avet slope running to the centre of Soldeu has for some years now held FIS certification, and this year this has been joined by another FIS certified slope in neighboring El Tarter!

Arinsal has a family friendly traditional charm about it and proves very popular with returning guests each year so if you’re looking for a friendly resort with great skiing then maybe you should look here.  A big benefit of spending your Andorra ski holiday in Arinsal is that Arcalis is also included on your lift pass, and this is often thought of by locals as the best skiing in the country, so well worth a visit.

So if we’ve whetted your appetite for Andorra then take a look at our holidays page, and maybe we’ll see you on the slopes here soon.