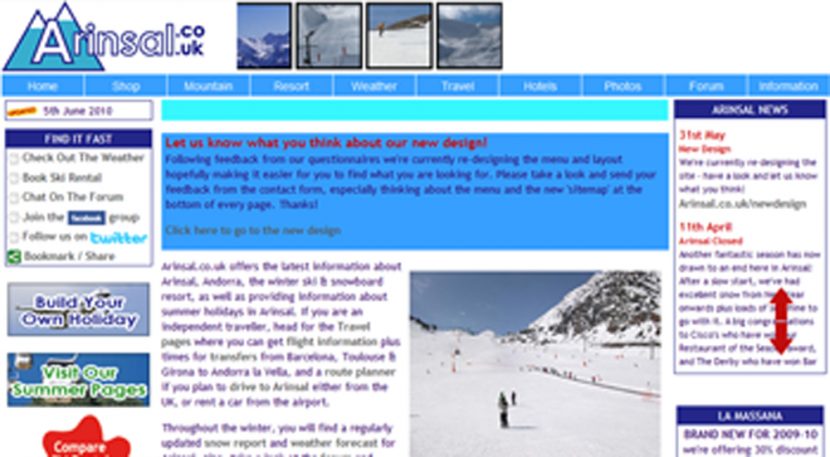 As we enter the last few days of 2019 it’s a great time to reflect on all the fantastic things that have happened over the last 10 years. We’ve seen a continual investment in not only the ski areas in Andorra, but the services and facilities as well. We’ve also seen it host some of the most prestigious events in the snowsports calendar including this year hosting the FIS World Cup. Check out our review of what’s happened here…

Back in 2007 the founders of Andorra Resorts realised that there wasn’t an up-to-date source of information for holidaymakers to plan their holidays online.

The first website, Arinsal.co.uk, was launched as just an information portal but developed to offer booking services for ski hire, lift passes and school.  We developed the website with continued feedback and subsequently launched websites for Pas de la Casa and Soldeu so we cover the main resorts of Andorra.

Soldeu was nominated on the shortlist for the Best European Ski Resort 2012 at the World Snow Awards, held in London on November 2nd, timed to coincide with the Ski & Snowboard Show.

The awards ceremony honoured the best resorts and companies in the world of skiing and snowboarding covering 25 categories with the winners selected by a panel of leading ski & snowboard experts as well as public vote.

The Andorra Resorts team headed to London and set up in Earl’s Court as part of the Ski Show. A great opportunity to meet new snowsports enthusiasts and let them know about why Andorra is such a fantastic destination to explore. We even had a free holiday to give away!

Also in 2014 we launched our new website as we constantly look for better ways to convey everything you need to know about Andorra.

After previously holding a stage in the Junior Freeride World Tour, it was now the turn of the grown-ups! Proving so popular with the tour, it now has remained a permanent feature on the World Tour calendar to this day. Here’s a video from the tour in 2019:

2016 saw the return of World Cup ski racing to Grandvalira, showcasing the superb world-class facilities on offer.  Not only did we get to see top-class racing but also a range of events surrounding the racing, making it an ideal time to experience the hospitality of Andorra.  Grandvalira hosted the Women’s Super-G and Slalom, both of which are very technical and a great spectacle to watch

In 2017 we opened our brand new meeting point in Arinsal to greet customers collecting their lift passes and lesson tickets. Located in the centre of Arinsal village and just next to the main St Moritz hire shop, it is in a great location.

2018 saw the opening of the Hotel Grand Pas in Pas de la Casa and the Hotel Ushuaia in Arinsal showing that it’s not just the mountain services and facilities that are being invested in. Both 4* hotels are in fantastic locations offering comfort and luxury in the mountains.

Sunday (17th March 2019) the FIS World Cup Finals came to a close in Grandvalira after an exciting week which attracted around 25,000 spectators in total. This was the first time Andorra has hosted this prestigious event, which is considered by many to be the most important competition on the pro-ski tour after the Olympic Games and World Championships.

Nearly 2500 people were involved with the organisation of the Finals which were a great success – not only in terms of sporting achievements and public involvement but also in showing Andorra to be a world-class resort. In an interview with Grandvalira, Director of the Organising Committee, Conrad Blanch describes the Finals as a “great festival of sports” which demonstrated Andorra’s “seriousness, efficiency and professionalism”.

We’d like to say a massive thank you to all our customers over the last 10 years and we look forward to looking after you in the next 10!