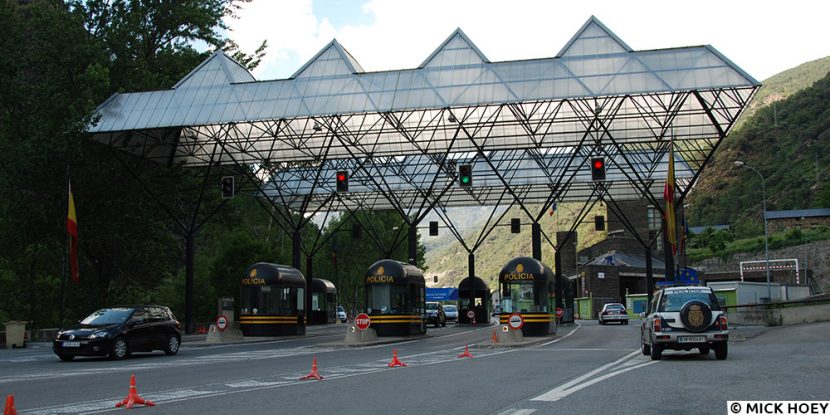 As you probably know, Andorra sits right on the border between France and Spain, however it is neither in the EU nor in the Schengen Area. So this poses the great questions of what happens when you cross the border, and do you need to get your passport stamped.

What is the Schengen Area?

Is Andorra in the Schengen Area?

No. Despite being on the border between Spain and France, and enjoying free movement between the countries, Andorra remains fully independent and is not a member of the Schengen Area. As you’ll need to travel via either France or Spain, first of all you’ll need to make sure you’re allowed into the Schengen Zone, so depending on your nationality you may be required to have a Schengen Visa.

Do I have to stop at the border with Andorra?

No, not unless you are told to. There are only two border crossings, one at either side of the country – at each border crossing you will find two sets of border police, the police for France or Spain (depending where you are), and the police for Andorra. The border is an open one, which means you don’t have to stop unless you’re told to, and most of the time it is free flowing.

You’ll get your passport stamped when you enter the Schengen Area, which will have the date you entered, eg. when you fly from the UK to Barcelona or Toulouse. When you leave the Schengen Zone you’ll get another stamp in your passport showing the date you left. As an example, if you’re travelling from the UK on a British passport and land in Barcelona on a Saturday, then fly home again the following Saturday, this would be eight days from your allowance.

Does my time in Andorra count towards my 90 days in the Schengen Area?

No. But maybe! For most people, 90 days in the Schengen Zone every six months is plenty, so there’s no actual requirement to get “stamped out” when you cross the border into Andorra (leaving the Area) and “stamped in” going home when you cross the border (back into the Area). However this means that officially you will have spent those days in the Schengen Area and will be used from your allowance.

The 90 days from 180 in the Schengen Zone are counted when you officially enter or leave the Area, so if you need to be careful about the number of days you use up, such as if you are a regular traveller for your job, then you’ll need to make sure you stop at the border to get your passport stamped.

How do I get my passport stamped to leave the Schengen Zone?

To get your passport stamped just stop at the French or Spanish border crossing and ask to be stamped out of the Schengen Area. It is a very common thing to happen, so the border guards will know exactly what you’re wanting.

If you’re arriving/leaving on a private or a shared transfer, just let your driver know well in advance that you need to stop at the border and it’s no problem to do this.

However, if you get your passport stampted to leave the Area on the way in to Andorra, make sure you do the same leaving Andorra to get stamped back in to the Area, otherwise you may run into issues when you next pass through a border crossing.

Going back to the previous example, if you arrive on a Saturday and go home the following Saturday, but you get yourself stamped out/back in as you cross the border you’ll only be using two days of your allowance rather than eight days.

Important note: it’s the French or Spanish police who will stamp your passport and not the Andorran police. When you arrive at the border this means it’s the first set of poice you’ll come to.

Will I get a passport stamp going into Andorra?