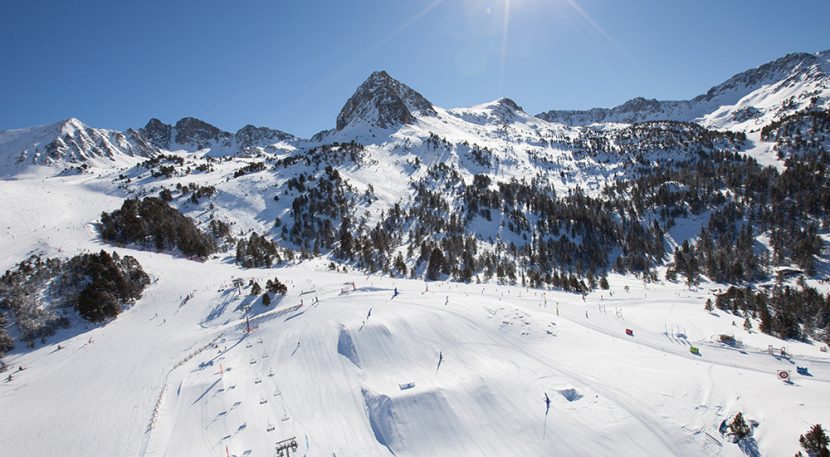 This winter Grandvalira has invested a further €13 million in developing their infrastructure and services, which means an even better experience when you visit the largest skiable domain in the Pyrenees. Here we’ll explain some of the highlights of the changes we can look forward to.

Peretol is now a linked sector!

For many years the Sunset Park Peretol (located near the main road between Soldeu and Grau Roig) has been a haven for freestyle junkies who head there after the main slopes have closed for the day. After the sun goes down, so they can enjoy hitting the kickers, boxes, rails and so much more.

This will continue to be the case after dark, however brand new for winter 2019-20 the Peretol has now been linked in the rest of the Grandvalira ski area by various slopes as well as a chairlift. You can ski down into Peretol from Pas de la Casa, Grau Roig and Soldeu. The return back out of Peretol sector is via the six-seater Pla de les Pedres chairlift, which is now the longest chairlift in Andorra after being lengthened during the summer. This lift finishes at the top of Soldeu which means if you’re staying in Pas de la Casa you need to ensure you leave yourself enough time to ski back home at the end of the day.

Every duration of Grandvalira lift pass now includes access to Ordino-Arcalis at no additional cost, which means you can head for an away day to Arcalis to see what all the fuss is about! Arcalis has hosted the Freeride World Tour for several years, and the skiing is superb – yes it’s amazing for experts, but there are still options for all abilities, including a 5km green slope.

To get to Arcalis they now have a fleet of minivans, and offer a free shuttle service to collect you from your hotel (and drop you back at the end of the day). To make use of the free transfers just call them up at least a day before you require it, once you’re in Andorra.

The brand new indoor car park in Soldeu will be open for this winter with space for 450 cars over four levels, and best of all the car park will be free of charge with a Grandvalira lift pass!

If you head to any of the snowparks this year you should notice a variety of improvements. In El Tarter the park has been updated as well as the forest area. At the Sunrise Park Xavi in Grau Roig there have been additions for beginners in freestyle.

A brand-new activity called Snake Gliss is coming to Soldeu this winter. It’s suitable for the whole family (children from age 3+) and is loads of fun – you’ll head up on the slopes after the mountain is closed to then be led down the mountain on an articulated sledge with an instructor at the front to control the snake!

We’ll soon be able to bring you news of snowboard lessons for children starting from age 3 years upwards, in partnership with Burton. This is a very exciting update, as we’re regularly asked about getting children into snowboarding

We should also be able to bring you exciting news about changes to the foot of the slopes in Soldeu, so watch this space!!