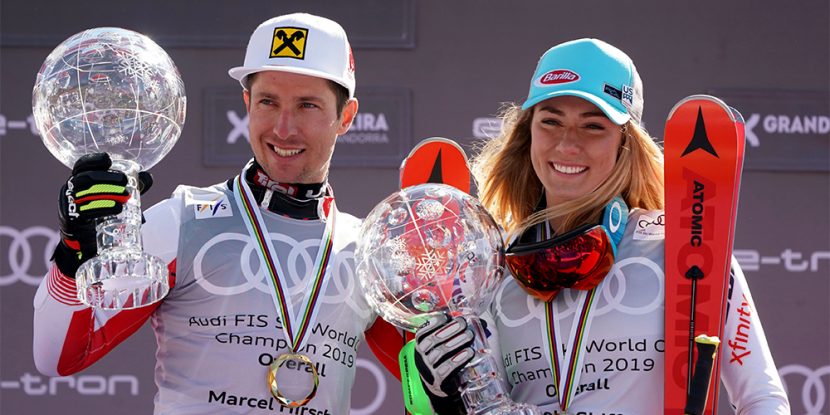 Sunday (17th March) the FIS World Cup Finals came to a close in Grandvalira after an exciting week which attracted around 25,000 spectators in total. This was the first time Andorra has hosted this prestigious event, which is considered by many to be the most important competition on the pro-ski tour after the Olympic Games and World Championships.

Nearly 2500 people were involved with the organisation of the Finals which were a great success – not only in terms of sporting achievements and public involvement but also in showing Andorra to be a world-class resort. In an interview with Grandvalira, Director of the Organising Committee, Conrad Blanch describes the Finals as a “great festival of sports” which demonstrated Andorra’s “seriousness, efficiency and professionalism”.

Pride and community in the opening ceremony

The World Cup Finals officially began on Monday 11th March as the Downhill trials were held on the black Aliga slope, but the event truly kicked off the following evening when Grandvalira put on a phenomenal opening ceremony on the black Avet slope in Soldeu. Hundreds of people turned out to watch the ceremony, filling the grandstands, the surrounding area on the newly built platform, and Soldeu’s many hotel and bar terraces.

The opening ceremony began with a descent of the black Avet slope by the ski demo team who were dressed head to toe in colourful LED lights. Shortly afterwards, creative animated films depicting Andorra’s history and edits of alpine skiing highlights were projected onto the face of the Avet, essentially turning the slope into a giant open-air cinema screen. This was an ingenious touch and completely unexpected. The strong sense of national pride and community was moving as the crowds cheered as flags from each of the representing countries were projected onto the slope; understandably, the loudest cheer of all came when the image of Andorra’s flag glided down Avet. Just when it seemed that the night couldn’t get any better, the ceremony finished with an incredible fireworks display that lit up the sky above the Avet slope and left the crowd buzzing in anticipation for the week that laid ahead.

“Passion” and “hospitality” of the Andorran people

The fantastic atmosphere continued throughout the week and was helped by the glorious weather, and of course, by the thousands of people who came to cheer the athletes on each day, and the volunteers who helped to support the event. The FIS has praised “the passion” and “the hospitality” shown by the Andorran people during the World Cup Finals and especially recognised the value of the 350 volunteers who contributed to the overall success of the event.

Grandvalira made an immense effort to ensure that the Avet and Aliga slopes were safe and in perfect condition, ready for the world-class athletes to ride. In the months preceding the Finals, 130 of Grandvalira’s in-resort maintenance staff spent hundreds of hours preparing the slopes, including pisteurs, machinists, avalanche-blasters, netting teams, patrol teams, human resources staff and quality teams.

Proving that hard work and dedication pays off, the conditions on Avet and Aliga slopes were excellent, despite the mild temperatures and lack of fresh snowfall in the weeks preceding the World Cup Finals.

In an interview with Grandvalira, Austrian World Cup skier, Marcel Hirscher, said that the conditions in Soldeu were above his expectations, as he hadn’t expected to find “winter conditions with spring weather”.

“Be prepared because we’ll be back as soon as possible”

Hirscher added that he’d like to “race here every year”, and although it’s not certain yet, it’s possible that FIS World Cup events will return to Grandvalira in the future. Since receiving praise and encouragement from the FIS for the “excellent standards” of the World Cup, Grandvalira has requested that Andorra is considered as a host for future World Cup competitions. Secretary-General of the FIS, Sarah Lewis has advised that Andorra should “be prepared because we’ll be back as soon as possible.”

The FIS will meet in May to organise the competitions calendar up until 2023 and will discuss whether Grandvalira will be included in its race schedule.  We’ll have to wait until then to find out, however, if Lewis’ statement indicates that it looks likely the FIS World Cup events will indeed return to Andorra.

Until then, the blue lines marking the courses on Avet and Aliga will continue to fade into the white snow, but the memory of the FIS World Cup Finals 2019 will forever live on in Grandvalira Soldeu-El Tarter.

Without a doubt, the Finals have been a huge success and an achievement which Grandvalira, and Andorra, can be extremely proud of.